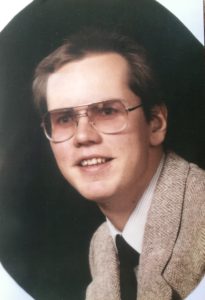 Kevin loved to ski! Even though his skiing was affected by his asthma, in the 70s before puffers changed the lives of asthmatics, he tried his best and even raced on the Soo Finnish racing team.

He came from a family of skiers and started to ski at the old Hiawatha Lodge trails before cross country skiing was really a popular sport. Skiing in those days was an adventure with narrow trails and a few large trees as obstacles on the steep down hills.

Kevin was always willing to help, whether it was cleaning some of the new trails we now enjoy, working at races, or helping with the Jackrabbits. In those days the Jackrabbit program, as we know it now, was just being developed by Cross Country Canada, but Soo Finnish Nordic Ski Club was one step ahead and had already developed their own program.
He was one of the first instructors with Cross Country Algoma, who traveled to local schools with a van load of equipment to teach young children the art of cross country skiing. Kevin loved being with the children who looked forward to each visit of the van and the lesson they would learn.
For those who knew Kevin during his brief life, he was a joy to be around, with his outgoing personality and quick smile.
Kevin passed away in 1985 at the age of 24.

The Kevin Allan Riutta Award is given annually to that person or persons who through example, endeavour and leadership promotes and fosters cross country skiing among the youth of Sault Ste Marie.

Past Recipients of the Kevin Allan Riutta Award