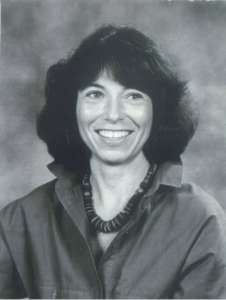 Janet Rodger-Anderson was a person of boundless energy & enthusiasm who injected her cheerful outlook into all of her work as a tireless volunteer with the Soo Finnish Nordic Ski Club. Among the official positions she held were Jackrabbit Coordinator, Ski Swap Chairperson & Race Team Liason Rep. In addition, like most people in the club, she pitched in & volunteered for any & all tasks (Lantern ski, Trail Trot, Hiawatha Invitational, Mabel Lake Tour & Canadian Masters among them).

Janet was also an elite Masters Athlete. As you would expect, her favourite sport was Cross Country Skiing. She represented the Club & medaled at, among others, the North American Vasa (Traverse City), the Canadian Masters, the Sault Ste. Marie Winter Triathlon, NOSD Races, the Hiawatha Invitational & the Hiawatha Loppet.
As a runner she medaled in the Sault Star Fall Colour Run, the Hiawatha Half Marathon as well as medaling at numerous road races throughout Ontario & Michigan.

What’s listed above were just her ‘hobbies’. She taught High School English full time, coached Cross Country Running, started a Cross Country Ski Magazine & helped build the family home next to her beloved Hiawatha. Lastly, but certainly most importantly, she provided a loving home where her daughters Stephanie & Kristen & her son Travis could thrive.
The family appreciates very much that the Club has seen fit to name an award in memory of Janet.

This award was first presented in 2003 to commemorate a dear friend to SFNSC and many of its members, Janet Rodger-Anderson. The award is given annually to the master skier who through example, endeavour, and friendship, promotes and fosters cross country skiing among the people of Sault Ste. Marie.